In the last newsletter I suggested we could do well if we could get an idea of which  way the US dollar would go from here.  I graduated from Regis University in 1984 with I major in economics. At that time, I thought the rules of economics were meant to last forever. I have kept every book I ever read on economics and the rules and equations I learned back then are almost worthless when talking about how currencies react today.

Under the traditional rules of economics, the value of a country’s currency tends to go up if the economy is doing better there.  That is what should’ve happened to China or India over the last 9 years. Their economies are growing much faster than the United States. But instead, in the eight years of the Obama administration, money has come to the United States where the growth rate was less than 2% as opposed to emerging markets where the growth rates were 4 to 5 times faster.  This in turn created a lot of discrepancies with the US stock market valuations being much higher than normal and emerging countries valuations being much lower than normal based on how Warren Buffet looks at this.  That equation is the total stock market divided by the total economy.

During the Obama administration, the Federal Reserve is told the rest of the world when and how much US government that they’re going to buy, and other countries have taken advantage of this information and bought much of the US debt themselves. This has been a relatively new phenomenon known as quantitative easing.

* Per the White House Office of Management and Budget (2016):

During most of American history, the Federal debt was held almost entirely by individuals and institutions within the United States. In the late 1960s, foreign holdings were just over $10 billion, less than 5 percent of the total Federal debt held by the public. Foreign holdings began to grow significantly starting in the 1970s and now represent almost half of outstanding [publicly held] debt. 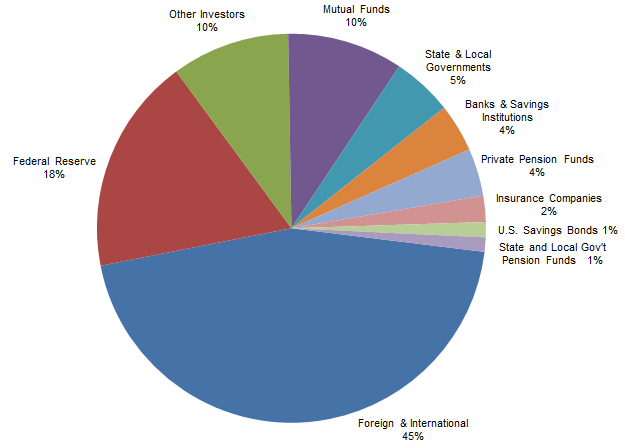 Graph and figures above are from the report: “Analytical Perspectives: Budget of the U.S. Government, Fiscal Year 2017.” White House Office of Management and Budget.

When the flow of money is coming into the United States because of the US federal reserve manipulations, the dollar tends to strengthen. This is what happened over the last eight years. Below is a report from Congress showing a couple of concerns of what would happen if the trend ever reversed and government started selling US debt.

There was a significant Congressional report done in 2008, entitled: “China’s Holdings of U.S. Securities: Implications for the U.S. Economy.” By Wayne M. Morrison and Marc Labonte, from the Congressional Research Service, January 9, 2008.

In that report a couple of big assumptions were made by Congress.

What does this mean?  I’m not sure for the short term, but it does mean, however, that the flow of money has just begun to reverse itself after several years and central banks around the world are now dumping US government debt as fast as they have since 1978.  This could be because governments around the world feel that the US central bank is about to reverse course and start raising rates and won’t be as accommodating as the past.

There is a story titled “China is reportedly thinking of halting US treasury purchases and that’s wearing the markets,” written by Fred Imbert on the CNBC website on January 10, 2018.  In the article, the author already in place what we know. That is, China is selling its share of US treasuries and that is starting to push interest rates up because there are less buyers for those securities.  This is the third bullet point that is happening, and the other two might happen if the Federal Reserve does an act appropriately.

Also, we should consider if Donald Trump is serious about jumpstarting US manufacturing, then he cannot do that without a weaker dollar. We will keep an eye on this because if the dollar comes down it could lead to a change in the valuations of markets all over the world.

The opinions voiced in this material are for general information only and are not intended to provide specific advice or recommendations for any individual. All performance referenced is historical and is no guarantee of future results. All indices are unmanaged and may not be invested into directly.

International investing involves special risks such as currency fluctuation and political instability and may not be suitable for all investors. These risks are often heightened for investments in emerging markets.

Government bonds and Treasury bills are guaranteed by the US government as to the timely payment of principal and interest and, if held to maturity, offer a fixed rate of return and fixed principal value.