I remember being in New York 1987 and the stock market dropped.  CNN reported that, “On October 19, 1987, the stock market collapsed. The Dow plunged an astonishing 22.6%, the biggest one-day percentage loss in history. Even bigger than the 1929 stock market crash, just before the Great Depression.” I was not too far out of college, so I went back and read my college economics books. I could not believe that none of my economics or accounting books could describe what exactly had happened. I began a quest to learn more about why markets behave the way they do.

Prior to that drop, life in this business seemed to be much easier. If a company made money, you invest in it, and if they lost money, you sold it. It all had to do with earnings.  Life changed and so did the markets. Over the years, many of you know that I have written about different things that change markets.

There is no individual book that you can get this information from. It is a little bit of everything.  Now, earnings, taxes, currencies, demographics, technology, and central banks all play a part on how a market does.  In this newsletter, I want to focus on just one thing.  The United States Federal Reserve.

I never met Marty Zweig, but back in 1987, I would watch him on Wall Street week with Louis Rukeyser and I would take in everything he said.  He nailed the crash within a couple of weeks and shortly after the crash, he wrote a book called “Winning on Wall Street” in which he detailed how to invest.   He detailed decades of the Federal Reserve moves and demonstrated how the Federal Reserve really created the crash by pumping in too much liquidity in early 1987 and pulling it out aggressively later.

He created a point system, and you would get plus points if the Federal Reserve lowered interest rates, and you would get negative points if the Federal Reserve raised interest rates.  The key being was to invest when there were lots of positive points and be very defensive when there were lots of negative points. He coined the phrase, “Don't fight the Fed.”

The US market is way overvalued by Warren Buffets targets.  As pointed by Warren Buffett, the percentage of total market cap (TMC) relative to the US GNP is “probably the best single measure of where valuations stand at any given moment.”  This is what it looks like today.  The all-time record before now was 2000! 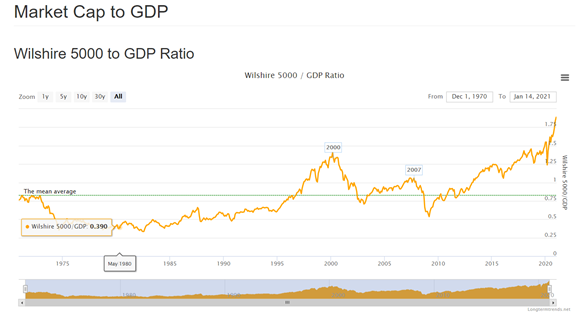 Here is part of an article from Wired Magazine written by Reuters on December 18th, 1999.

“THE STOCK MARKET just keeps on climbing and Federal Reserve boss Alan Greenspan is making a massive amount money available for the economy. Is it irrational exuberance or Y2K paranoia? Or Both?”

"All the signs suggest Greenspan is scared to death about Y2K and he thinks that this is a cataclysmic thing that could bring the world economy down," said Don Hays, president of The Hays Market Focus Advisory Group, an investment consulting firm.

"The money supply has gone through the roof and the increase, adjusted for inflation, is the biggest in the nation's history," Hays said.

"The Fed may be flooding the nation with cash because of jitters among central bankers that the Y2K computer bug could do more damage to the financial system than most people expect," he said.

"I just don't have another excuse other than Y2K to imagine why the Fed would flood the system, unless there is something that's happening behind the scenes that we don't know about," Hays said. 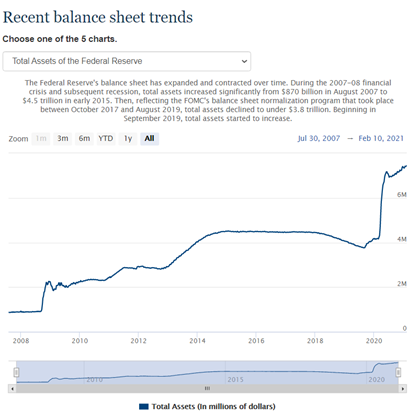 In other words, the Fed will be buying copious amounts of Treasury and agency mortgage-backed securities for a long time. That's what one can assume anyway based on remarks from Fed Chair Powell at his press conference.”

The Wilshire 5000 Total Market Index, which consists of more than 5000 companies, represents virtually all the capitalization of the entire U.S. stock market.